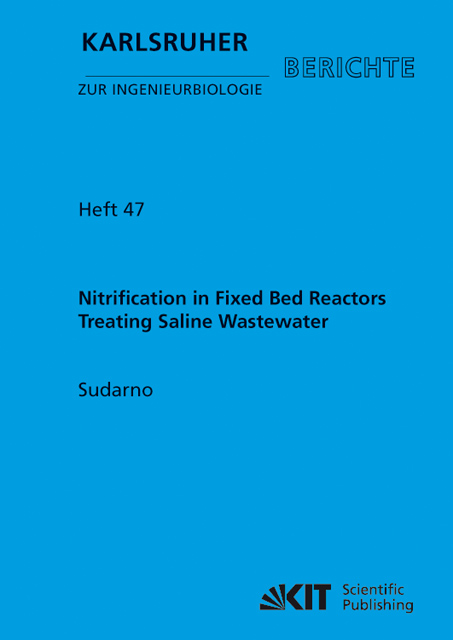 Two fixed bed reactors for nitrification with either polyethylene/clay sinter lamellas (FBR A) or porous ceramic rings (FBR B) were continously run for treating synthetic saline wastewater. Seawater from Hafen Büsum was used as an inoculums. The performance of the system was evaluated under different operating conditions.

For studies of the effect of fluctuating salinity on the nitrification, polyethylene/clay sinter lamellas or porous ceramic rings from FBR A and B, respectively, were used as a source of immobilized nitrifiers. Salt concentrations were decreased from 3.5% to 0.03% via 2, 1 and 0.5% and increased from 3.5% to 5, 7 and 9%.

Measurement of oxidation rates during changing conditions show that the NORs were always higher than the AORs in all reactors, especially in initial phase. However, NORs were more sensitive to the salinity fluctuation than AORs, especially at lower salinity. The AORs remained constant for 0.5-3.5% NaCl and dropped to 70% and 68.5% after the salt concentration was brought to 0.034 or 5%, respectively. The NORs decreased significantly to 62% and 87.5% of initial rates after the salt concentration was changed to 2 and 5%, respectively.

Non-halotolerant nitrifiers reactors with fresh polyethylene/clay as supporting material were inoculated with water samples taken from a "Brackwasser"-location at the North Sea and were continuously run. The salt content in medium was 0% at the start and was then increased up to 10.5%.

Increases of the salt concentration in a non-salt-adapted FBR suppressed more to NOR than AOR. When salinity was increased from 0.03% to 0.5, 1 and 2%, AORs remained constant. The AORs were approx. 90% of initial rates after the salt concentrations were increased stepwise to 3.5%, whereas the NORs decreased to 85, 52 and 36% of initial rate after salinity was increased to 1, 2 and 3.5%, respectively.

These are words or phrases in the text that have been automatically identified by the Named Entity Recognition and Disambiguation service, which provides Wikipedia (

) links for these entities.