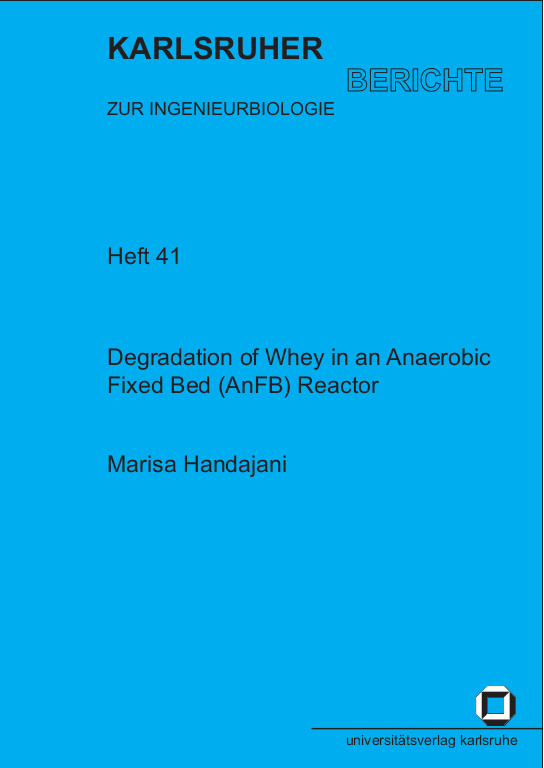 Degradation of whey in an anaerobic fixed bed (AnFB) reactor

The AnFB reactor was used for treating high concentrations of whey-containing wastewater. Optimal operating conditions for whey treatment at a concentration of COD in the influent of around 50 g whey·l-1 were found for a hydraulic retention time (HRT) in the range of 4-8 days or an organic loading rate (OLR) less than 10 kg COD·m-3·d-1. This is a higher load than normally applied in praxis reactors.

Accumulation of volatile fatty acids (VFAs) happened when the AnFB was supplied with surplus whey solution at a high OLR or when it was oxygenated. VFAs were accumulated faster when the HRT was changed from 12 days to 6 days compared to a change of HRT from 6 days to 4 days. However, at a HRT of 6 days, the accumulated VFAs were completely degraded after an adaptation period of about 5 days, whereas the accumulated VFAs at a HRT of 4 days remained constant upon time and could not be degraded during further incubation.

The conversion process (acetogenesis and methanogenesis) of VFAs was influenced by the pH in the reactor. Acetate and n-Butyrate were converted faster at neutral or slightly alkaline pH, while propionate was degraded faster at slightly acidic pH-value.

Acetate-utilizing methanogens seemed to be unable to grow as single cells. They preferred to grow in a particulate or attached manner on a support material. The biofilm on the support materials provided a lower redox potential and an anaerobic environment that was obligately needed by these bacteria. The addition of a reducing agent was necessary to keep the few culturing acetoclastic methanogens in suspended cultures active.

H2/CO2 was the best methanogenic substrate for the bacteria in the effluent suspension of whey reactor, followed by formate and methanol. The least degradable substrate in suspension cultures was acetate. The optimal H2 gas concentration for methanogens was provided at 2.25 bar.

Ferric ions addition or the addition of a mix of minerals improved acetate degradation and methane production rates more than two-folds. The redox potential + reducing agent was low enough for methanogenesis. An AnFB-reactor would be a suitable means for stabilizing wastewater from dairy processing. Liapor-clay-polyethylene sinter lamellas in a regularly arrangement could be the substratum for biofilm formation. A minimum HRT of 4-6 days should be planned or a maximum OLR rate 10 kg COD·m-3·d-1 not exceeded.

These are words or phrases in the text that have been automatically identified by the Named Entity Recognition and Disambiguation service, which provides Wikipedia (

) links for these entities.